I am becoming more and more bullish for GBPJPY. On daily chart, it looks like:
(1) ABC correction has finished, and it may be forming wave 3
(2) I can see a large head and shoulder pattern - this is really big head and shoulder

I like this confluence. The only concern is that there is still risk of coronavirus shock, and yen could strengthen if the stock market volatility rises... So far the price is moving as expected. Let's see how it goes. 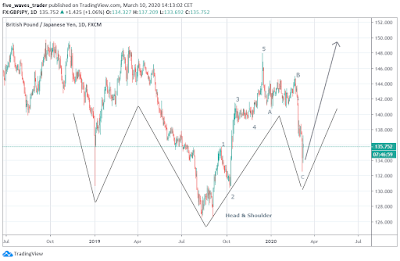 Is this an opportunity to buy oil?

It is rare to see oil price drop below $30. I would consider this a good opportunity to buy oil for long-term investment both from (1) technical, and (2) fundamental reasons.(1) technical reasonLooking at the weekly chart, the price is potentially forming a triangle. Ideally, the price should drop below $25 and bounce back. 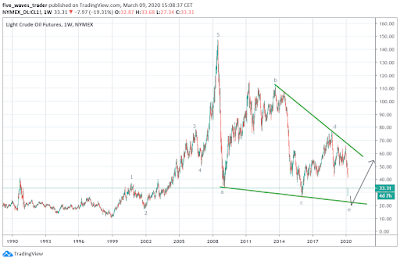 (2) fundamental reasonThe oil price drop was caused by Saudi Arabia for a political reason. With the current price level, the majority of oil fields around the world are not profitable, therefore there will be significant decrease in production in due course. Once coronavirus issue is calm down, oil price should bounce back due to demand / supply imbalance.
at March 09, 2020 No comments:

After the price retraced, it looks like Bitcoin has finished ABC correction as wave 2. The end of wave 2 is exactly at 50% retracement level of wave 1. This is typical for wave 2.If this analysis is correct, the next upswing is wave 3 and it should break past the previous high! 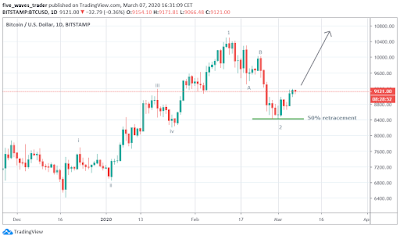 
In the previous post, I mentioned GBPJPY could reverse up. After that, I closed my long position with small profit when I saw the upswing was weak. I am becoming more bearish on stock market overall, thus yen pairs could strengthen further in general.It is possible that GBPJPY is still in the midst of wave C, and it could go down further as wave 5 of wave C. This view could be further strengthened if the S&P500 futures goes down in the beginning of the week (see my other post on S&P500 ). 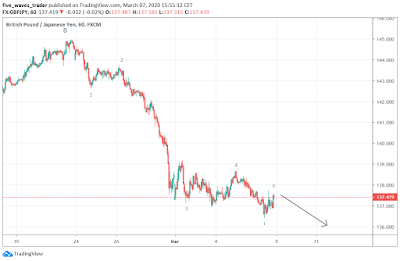 
Until 1 month ago, most of Elliott Wave analysis I saw suggested S&P500 was still on bullish trend.
However, with breach of key levels which I thought could work as support and the sharpness of the downward move, my view has to be changed.

Here is my current view as of today.

With the current downside move, the price clearly breached the top of wave 1 ($2960).
In Elliot wave theory, there is a possibility that this could be still a bullish diagonal formation, but now I think the possibility of that is low because of the wave characteristics:
- the sharpness of the downside move
- even after the sudden Fed rate cut, the upswing was very weak, and pulled back fast. Also this upswing looks like a ABC formation, which is bearish (see hourly chart below). 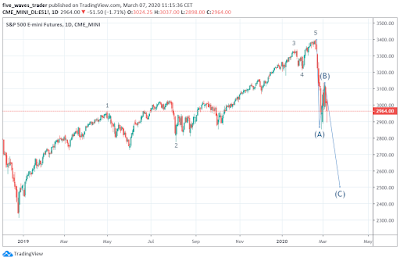 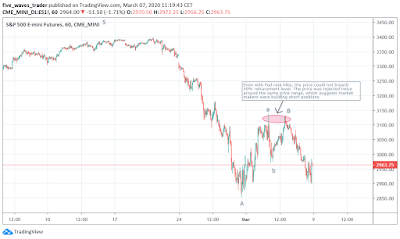 (2) Now the price is forming wave C - another leg down

The sharp downside move to around $2850 level was a bit surprise. I was expecting a sharp pull back, but this did not happen even after Fed rate cut. Like said before, this upswing looks like a ABC formation, and Wave B could have ended already. If this is the case, the current down move is forming wave C.

With current volatility, anything could happen, but this is my current base scenario. Is this a buying opportunity? Clearly NO, to me. At least not yet.

Going down to 15min chart, it looks like the price formed a irregular flat as wave 4 (of wave 1 of wave C, sorry that this is complicated) and the market closed on Friday. If this is correct, there could be further downside in the beginning of the week.

Once the wave 1 of wave C has completed, then price could bounce back on the short-term as wave 2 of wave C. 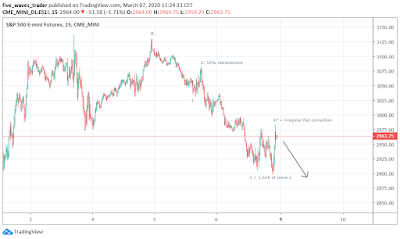 To me, Elliot wave is a scenario planning tool. The price may not behave as you expect, but you can be prepared for what may happen. We have to keep updating our views as the price behavior unfolds. Let's have a good ride!

Gold uptrend may have ended and starts to retrace down

I posted an analysis on Gold on my blog a while ago, saying the uptrend may be ending.Now gold is likely to have finished 5 waves impulse, and starting to retrace down. Probably this will be ABC correction, but could be time consuming. Let's watch how the price behave. 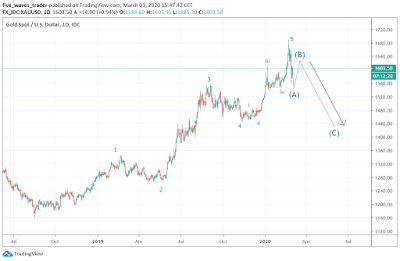 A time-consuming ABC correction may have finished for GBPJPY . If this understanding of market structure is correct, the next swing up should be strong and big. I consider this very good risk-reward trade. I already entered a long trade! 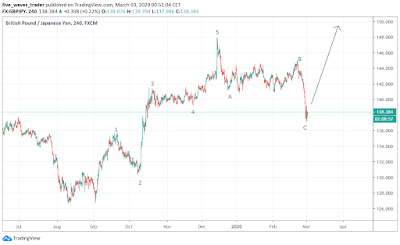 I am becoming more and more bullish for GBPJPY. On daily chart, it looks like: (1) ABC correction has finished, and it may be forming wave ...